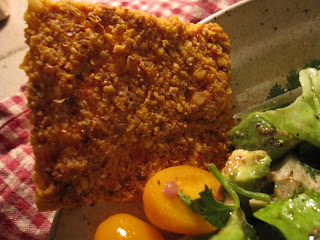 Cheese and I had a break-up in January – shhh, we’re back together. I just had some sinus issues to work out. Of course, I had to get my cheese in somehow, so I set about conducting some dairy-less experiments in my kitchen with the help of some vegan sympathizers. I know, I know…a dangerous and unlikely path.
The recipe for these raw Cheez-its made it into my repertoire after I read raves on several food blogs. They are effortful, oy, but they were actually quite delish. Think of Pizza Fish, then give them a nubbly texture – actually, try to imagine Pizza Fish granola.
If you’ve dabbled in raw cuisine, you know that the idea is to eat as much living food as possible in order to harness nutrients maximus – raw veg and fruit, sprouted nuts and grains. It’s an oven-free situation, although you can dehydrate food at low temperatures, usually 110 degrees or less. My convection oven just happens to hit that mark, so I decided to it was time to enter raw Cheez-it production.
I set aside twenty-four hours. Seriously. I soaked some nuts. Yup. Then I ground them up with a few simple ingredients, spread the dough on parchment paper, and no-baked the beast overnight. If you think the process sounds torturous, let me tell you this: the house smelled sooooo good. It was like having a sun-dried tomato air freshener.
My no-bake Cheez-its lasted about a month, and I took them to work in my lunches alongside salads or avocado halves. Because they are chock fulla nuts, they were really filling. So, even though I was eating like a bird, I felt full (sorry, I don’t mean to sound like a diet pill commercial).
Crazy thing is, I’ll make these again, not because they taste like cheese but because they don’t. They taste healthy and fresh, and when it’s tomato season, it’ll be a good way to use up some of the bounty.
If you’ve got a dairyless cheese testamonial, let’s hear it. If you are raw curious, you might check out the the super-friendly raw food community at Raw Food Rehab; if you're way curious and in PA, you might check out the raw cafe at Arnold's Way in Lansdale. If you really want to jump down the raw-food rabbit hole, check out the Raw Cookbook, by Juliano.
Posted by Madame Fromage at 3:50 PM