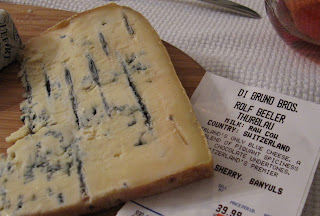 Maybe my own Swiss heritage makes me biased, but I can’t stop thinking about the Rolf Beeler Thurblau, a raw milk blue from Switzerland, that has a sweet, bitey flavor that keeps evolving. When we had our last tasting, our Stilton lover called this “a blue lozenge,” due to its melty mouthfeel; his partner, an art museum director, tasted “crisp green apples” and “lavender hay.” There is something colorful about this cheese, a beautiful hard blue that is both piquant and chocolaty, with brush strokes of sweet grass and citrus.

Tonight, as I was packing for my trip to the Wisconsin motherland, I stopped to prepare a little cheese board. A few crumbles of this and that from the über crisper. I lit the candles. Cut up some figs. Toasted a few walnuts. I let the cheese soften, waiting for Monsieur Fromage to finish teaching his night class, and when he came through the door we sat down to a lovely snack plate.

I bought a few new blues today that I’ll reveal shortly, but I must say, I had forgotten how good the Thurblau (“true blue”) tasted, how busty, how bold. Imagine an Emmenthaler infused with a sharp, tongue-rattling blue. It would be wonderful with cold green grapes and a glass of sherry, especially on a mountain picnic, when it could be enjoyed with cowbells in the distance. Although it’s not a blue that you could eat a lot of in one sitting, it is definitely the kind of blue that adds “achtung” to a cheese sampler, and it’s the only blue I’ve tasted so far that has tiny crystals in it.

Next to a Stilton and a Roquefort, it would be a diplomatic third – not as vixeny as a Roquefort but almost as nuanced as a good stilton. Think of it as a Gustav Klimt painting next to, say, an Egon Schiele (Roquefort) and an Albrecht Dürer (Stilton). Picture gold notes, a passionate sweetness. Now you’ve got it.
Posted by Madame Fromage at 8:28 PM 1 comments 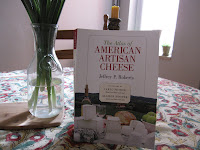 Back in March, USA Today ran a story about a cheese roadtrip through Wisconsin.  Brilliant! Reading it got me so excited that I went online and ordered a cheese atlas.  That’s right, an atlas of cheesemakers all over America.  I pictured detailed maps and helpful travel information -- a kind of Frommer’s of Fromage.

Then I got my copy of The Atlas of American Artisan Cheese in the mail, and I was disappointed. Despite its lovely introduction by Carlo Petrini (of Slow Food fame), the book is really no more than an encyclopedia of cheesemakers grouped by state, with profiles that have been assembled through questionnaires.  Some profiles are several pages long, others only a paragraph.  Sure, there is useful information – phone numbers, web sites, photographs of people in overalls holding up wheels of golden cheddar – but the atlas feels more like a marketing tool than a guide you’d want to stash in your glove compartment and thumb through at rest stops.

I’d like to see a cheese atlas with road trippers in mind – a book with useful maps and real travel writing compiled by people who had actually visited the farms.  I know this was not what Jeffrey P. Roberts had in mind when he edited The Atlas of American Artisan Cheese.  Still, I think cheese tourists could be cultivated in Wisconsin, much the same way Napa has generated hoopla around wine tasting, but people need a good road guide.  I happen to love Carr Valley cheese, but I don’t think the Atlas of American Artisan Cheese would inspire a road trip to La Valle, Wisconsin.  Is there camping nearby?  Is there a juicy tavern full of taxidermy that serves good fries?  Is there a place to buy a crusty baguette?

I’m heading to Wisconsin on Wednesday, and it looks like I will be hopping in my rental car to Lewis-and-Clark it alone.  I know I want to pay a visit to North Hendren Dairy Co-op in Willard, home to my favorite award-winning Gorgonzola.  Alas, it’s not included in the Atlas of American Artisan Cheeses, so maybe I’ll just have to create my own -- one that includes a list of pit stops and watering holes for curious travelers looking to cheese-taste their way across the Plains.  What we need is a cheese atlas with flavor!

Posted by Madame Fromage at 11:07 AM 2 comments 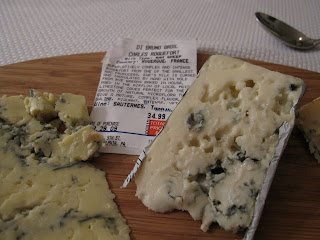 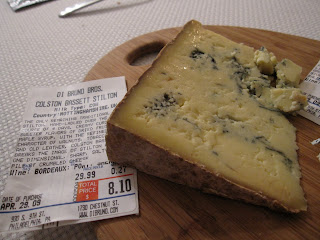 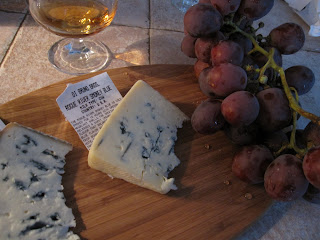