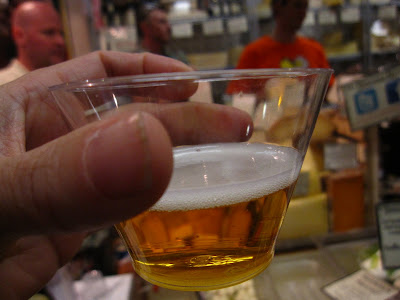 In the last year, I've popped a lot of bottle tops at cheese tastings. One thing I've noticed: beer is forgiving. It's hard to find one that doesn't like at least one style of cheese, and many brews go with multiple cheese styles. Take stouts, for example. They're such good matches for salty blues, and they're willing to double-bunk with triple cremes. That's great for someone like me who loves blues but hangs out with a lot of Brie heads.

Interestingly, most cheese books don't offer pairings for beer, only wine. Bummer. I like Sauv Blanc with soft goat cheeses, too, but sometimes that age-old classic feels like a rewind. Ever had Humboldt Fog with a wheat beer? Mesmerizing.

Lots of tastings that I follow around the country -- remotely, mostly, I'm not like a Phish Fan who follows cheeses across country, although I do like the thought -- are highlighting craft beer and artisanal cheese. Maybe it's the economy. Popping a cap rather than pulling a cork tends to be easier on the debit card.

On Sunday, I'm co-hosting an autumn cheese class with beer and preserves, so I've spent a lot of time nosing around the internet for interesting suggestions. If you, like me, like monkeying around with dairy and hops, here are a few highlights and little ol' rules of thumb.

-Heavy beer draws out meaty flavors in cheese, while lighter beers highlight creamy textures. Many thanks to Slashfood's Belgian Ale 101 for that one.

-Alpine cheeses with bocks and Oktoberfest? That makes sense -- why wouldn't Germans reach for native cheeses to pair with their malty creations? Beer Advocate called that one.

-At the Artisanal website, there's a list of cheeses that pair well with a variety of beers, from saisons to lambics. I'm curious to put a meaty Epoisses against an IPA.

-Ever tried Rodenbach Red Ale? It's wildly complex -- sour, oaky, with a big fruity pop to the eye. I've been mulling over an appropriate cheese. Thanks to Brewtopia, I'm off to try some French Munster.

-For pairing basics and a beer glossary, check out The Nibble. They offer a useful chart with some interesting combos, like Provolone and pale ale.

-Back in spring, I pulled a local beer blogger into my kitchen and asked him to advise on beers for a plate of fabulous cheese. His research notes at In Search of Beer are pretty great.

-If you want a fun tasting prop, print out the beer-and-cheese pairing placemat from Cypress Grove. These guys make gorgeous goat cheese, and they've got the marketing down.

Other useful pairing tips? Shout me.

Posted by Madame Fromage at 5:31 AM