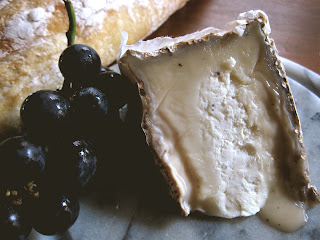 The birth of Cypress Grove’s Truffle Tremor warranted a cheese party. The California goat-cheese empresarios are well-known for their award-winning Humboldt Fog–a cheese with a layer of ash between the morning and evening milk (to eat it is to float away)—so the company’s new release, a truffle-laced goat cheese that won a gold medal at the Fancy Food Show, sent me off to the cheese man for a gorgeous wedge.

Last night, I invited several cheese hounds over for nibbles and drinks. No one wanted to miss a taste.

I set out the Tremor at five ‘o clock for a photo shoot on a slab of marble. By 5:10, it had oozed an inch, releasing itself like a snail from its shell. By six, it was melted ice cream. We scooped it up with espresso spoons and spent a good half hour oohing and decoding its layers.

The Blue Cheese Goddess detected “earthy swirls” in the center, the taste of “unsalted butter laced with mulch.”

Monsieur Camembert went right for the peppery rind, which he called “the crust mantle,” deeming this part most delectable.

The Blue Cheese Brit, a regular at these follies, ate a core sample and was moved to screech, “It’s like truffle-hunting naked!” As if. Thank goodness he left his truffle pig at home.

Truffle Tremor has superb layers of flavor. The whiskery bits of truffle are barely visible but as alluring as a man with fine stubble. The texture is topographic–from ultra-creamy, to liquid, to leather-soft. The experience is much like eating a chocolate truffle, one that breaks nicely on the teeth to reveal a soft center.

If you like complex cheese, one that blooms slowly in your mouth rather than bowling you over, this is worth tasting. Invite some close friends, open a good white wine (we enjoyed an Oyster Bay 2008 Sauvignon Blanc that was light and citrusy), and turn off all the lights. Then wait for a subtle earthquake.
Posted by Madame Fromage at 12:40 PM