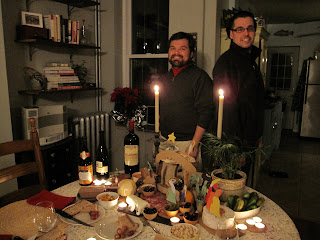 Here it is, this year’s cheese crèche put together by The Brothers Gruyere, a.k.a Andre Darlington and Todd Stregiel, with cut-outs by Jen Holmes. It was regal. It was deluxe. It took us four hours to nibble and break it down.

We started locally with a beautiful goat log by Firefly Farms, a melt-on-your-sweater cheese with an elegant, yogurty finish. This was our mellow introduction to a trio of goat cheeses rounding out the barnyard portion of our crèche. Its yule-log shape made for a perfect party kick-off.

We followed it up with a pyramid of Valencay, our Star of David – what a knockout. I love anything dusted with ash, and this French sparkler was ethereal: smooth, lemony, light. Think of sweet hay, then package it into something cute. Valencay. 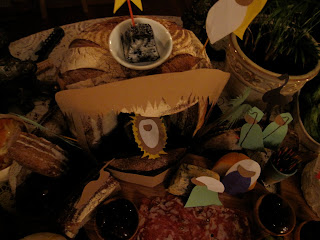 After a round of pistachios, we cut into a purse-sized wheel of Drunken Goat, a perennial favorite. This red-wine soaked Spanish wonder makes a great little picnic cheese – it’s fruity and tangy, with a winey edge. Even with piles of snow on the walk outside, it felt meadowy at the table.

Should I keep going? Well, we had some Epoisses whiffing up the crisper, so we broke it out to sample alongside the manger, a gorgeous little leaf-wrapped cheese called Banon. When I see this cheese in cases, I have the same reaction that people used to have when they saw Beanie Babies – I squeal and grab it. This cheese has to be one of my top 10 faves, and not just because it’s swaddled in booze-soaked chestnut leaves. I love the consistency. When you peel it open – very dramatic – its fragile rind cracks, releasing the most aromatic fondu. Imagine a savory dulce du lece, yes, there you have it. Drag some crusty bread through it, and you’ve gone to heaven. Banon really is an ideal manger cheese. 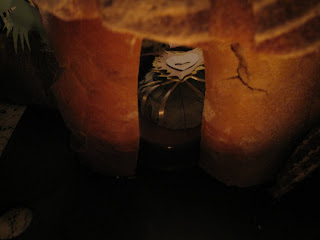 We couldn’t help ourselves, at this point, we got very riled by a French cow cheese, called Gaperon, which comes wrapped in yellow ribbon and looks like a bloated Christmas ornament. Rob Kaufelt calls Gaperon “the salami of cheese” because it is flecked with garlic and pepper, and it really does make you crave a cured-meat chaser. From Auvergne, this cheese was originally traded for dowries and hung outside of people’s homes to signify wealth. If we had any left, I’d run out and hang it from a stop sign. I want everyone to try this fabulous spiced cheese, which has the creamiest center and the most divine, tissue-thin rind.

Some guests might have pooped out at this point, but suspense is the key to a good cheese board, and we had a wheel of perfectly aged Pierre Robert, pocked by three wisemen, that everyone was dying to try. This triple crème is really the Taj Mahal of bloomy cheeses -- ghostly in color, architectural in terms of its rind to really-creamy-middle ratio. We broke out some sour cherries, then sliced ourselves cheesecake-like slivers of this gorgeously runny salt lick. Our moans made the candles flicker. The mouthfeel = a slipper, and the taste calls to mind a mousse made of broccoli sprouts – vegetal glissandos of flavor. 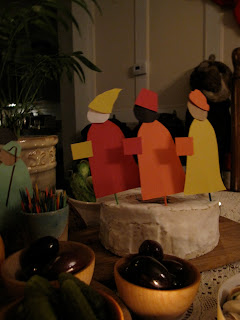 So what was the star of this year’s Cheesemas pageant? For Monsieur Fromage, it was the Gaperon. He’s already calling it “the new mistletoe.” Maman fell in love with a nubbin of Mahon that I failed to mention; really, it was the quince jelly that made her heart murmur act up. Brother Gruyere had a fainting spell after eating the Epoisses, and his lady love stole secret nibbles of Pierre Robert when the party, blessed out and sipping wine, moved on to Youtubing “The Muppets.” (After a silly amount of dairy, puppetry is really the perfect après diner.)

But for me, the leaf-wrapped Banon will always be the highlight of Cheese Creche ‘09. Maybe I like the poetry of unwrapping a cheese that looks like something made by caterpillars and finding…ahhhh, molten glory. That’s what the Christmas story is all about anyway, right? Wonder bundled in wonderfulness?

Yes, and now, merry cheesemas to all, and may your next cheese be ripe. 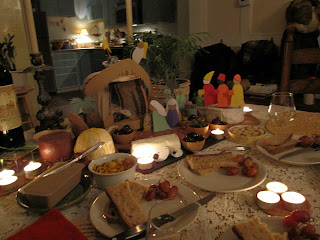 Posted by Madame Fromage at 9:51 AM