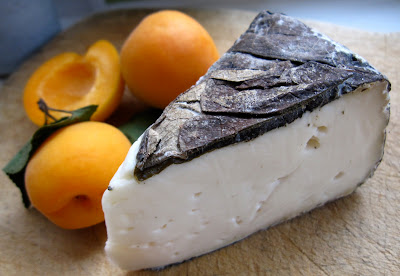 Splendor has a new name: Sally Jackson. This small-batch producer from Oroville, WA makes one of the most glorious goat cheeses I’ve tasted to date. Talk about nuance, talk about flavor notes, talk about a cheese that pairs so beautifully with ripe apricots I nearly crumpled to the kitchen floor, weeping. Oh heaven, it comes in grape leaves. If you are reading this, log off. Get into your car. Drive to Oroville now.
Like her cheese, Sally Jackson’s web site is rustic. You won’t find a lot of detail, but you will see her rather small herd of animals, all lovingly pictured – in fact, there are many more photos of goats than cheese. Don’t let the low-fi design fool you though. Sally and her partner Roger are credited with being among the first artisans to bring back craft cheesemaking in America. Twenty years ago, Sally sold cheeses out of the back of her car to chefs in Seattle. Now, chefs stalk her.
I picked up my wedge at Di Bruno Bros. (Italian Market location) here in Philadelphia, where cheesemonger Zeke Ferguson told me the story of how he approached Sally Jackson five years ago about carrying her cheese. She just now got back to him. Needless to say, it’s not inexpensive, but at $39.99 a pound, it’s still cheaper than blue jeans, so, come on.
Here’s why Sally's cheese is worth tracking down: You know how ripe tomatoes smell on the vine -- pungent, like heat itself? Well, this goat cheese has a similarly captivating smell, like warm earth. Then you put it on your tongue, and it tastes completely different – not musty or goaty, but sweet, floral, almost grapey with a lovely citrus hook that just goes on and on until you’re starry-eyed.
Alongside apricots, it’s sublime. I think some of those little champagne grapes that burst in your mouth would be awesome, too. And I’d serve it with rustic bread – although it doesn’t need any – and a glass of Riesling. Honestly, I stood in the kitchen last night and ate half this wedge without meaning to, and now I think I am going to go eat some more.
If you’ve wondered why people freak for raw-milk cheese, this is why. 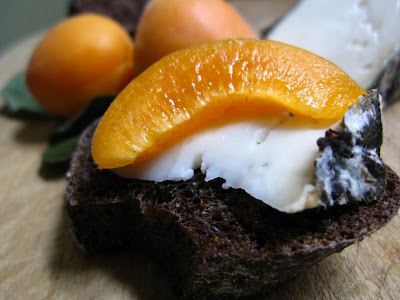 Posted by Madame Fromage at 6:15 AM