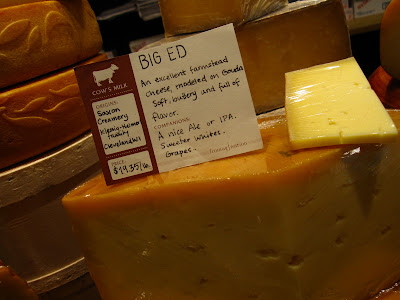 I first read about Big Ed in the Washington Post. Here was a raw cow's milk cheese (with a great name) from my home state, and I'd never heard of it. How was this possible? Needless to say, when I traveled back to Wisconsin in May, I went on a hunt for Big Ed. He was coming home with me.

In Fromagination, a cheese shop in downtown Madison, I found him. What love! He was a 15-lb wheel with leaves embossed around the edge, about as pretty a cheese as I'd ever seen. I was smitten.

My brother and I had plans to host a small grilled-pizza party that night, as it was his birthday, so we picked up a selection of our favorite Wisconsin cheeses and decided to make an all-state blow-out of WI pies. We grabbed some Bleu Mont Dairy Bandaged Cheddar, some BelGioiosi Parm, some local mozzarella, a wedge of Dante (a stunning sheep's milk cheese), and a great slab of Big Ed.

Big Ed is a gouda-style cheese that comes from Saxon Homestead Creamery in Cleveland, WI on the shores of Lake Michigan. It's named after a guy named Ed Klessig, who supported his three sons in a cheese-making endeavor that began back in 2005. Now, the real Big Ed is no more, but his belief in being a steward of the land lives on, in part through this cheese. Saxon Homestead Creamery practices rotational grazing to produce about five high-quality artisanal cheeses. Saxony, their latest release, was just written up in Culture Magazine.

This might be a gouda-style cheese, but it's more flavorful than any gouda I've eaten. It's got a buttery texture, but the flavor profile is nutty, salty, and gently beefy -- we decided to test it against some sharp pizza ingredients, namely onions, mushrooms, black olives, and a whole load of chives. 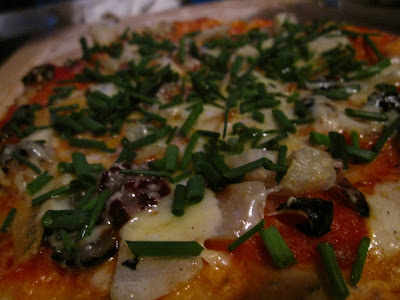 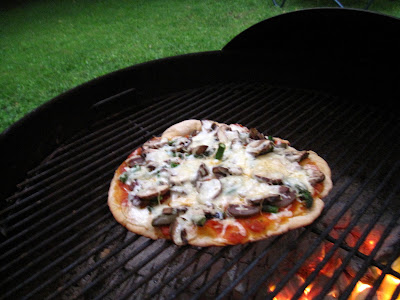 Delicious. Big Ed melted beautifully and paired so well with the onions and olives. Our pizza party got a little rained out, but that didn't matter. We ate in my brother's garage, and even the chefs (my brother Andre, and his girlfriend Jen) managed to stay dry. And happy. 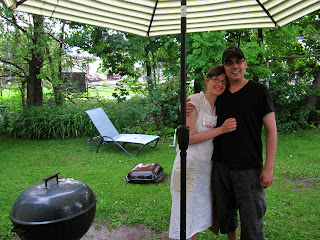 Posted by Madame Fromage at 4:05 PM