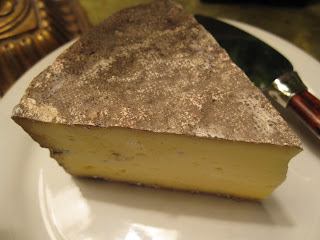 I have always liked mold. Still, I was a little unprepared for the gray furze on the surface of Bloomin’ Idiot, a new cave-aged blue from Hook’s, a company that I think of as the Prada of Wisconsin blues. I unwrapped the package, then went online to the Hook’s web site to make sure I hadn’t let my little bitta luv sit in the crisper for too long. Nope. This cheese is supposed to look like the moon.

“Bloomy” cheeses are usually white, at least in my experience. Think brie. Think camembert. They look like leather purses. You can eat the rind (I usually do), but if you’re mold-averse, you can cut the crust and dig into the center. Bloomy cheeses ripen from the outside in – instead of injecting mold into the cheese itself, cheesemakers spray or rub mold spores onto the surface, then let the wheel age. The resulting cheese is strong around the edges and mellow within, kinda like a Philadelphian.

I’d never encountered a bloomy blue until last night, when I stared down Bloomin’ Idiot on my kitchen counter. I wanted to put on some boxing gloves. I mean, this wedge looked tough. I let it breathe, put on a little Billie Holiday (“Am I Blue” seemed appropriate), then read a blurb about Patti Smith in the New Yorker which mentioned both Prada and “punk chanteuse” in the same sentence -- delightful. I hoped my bloomy cheese would be a punk chanteuse.

Bloomin’ Idiot tastes barnyardy with a sharp blue kick at the end. It brought to mind tractor pulls, where there is often a lot of dust and pollen in the air, alongside the smell of hot rubber. The sharp taste at the end reminds me of that rubber smell, although that’s not a bad thing. The mouthfeel is creamy, and because there are small holes in this ivory dream, I thought of baby swiss. If I had been blindfolded, I couldn’t have told you this was a blue cheese. It’s definitely one of the more unusual blues I’ve tasted. The cantankerous purist in me was skeptical, but the punk chanteuse definitely dug it.

Last night, I also broke out a wedge of Dunbarton Blue, another new and unusual blue from Wisconsin, this one from Roelli Cheese Haus, in Shullsburg. This is a great pairing if you want to peruse the Roquefort periphery, because although these two cheeses sing bluesy notes, they definitely rock out with their own sweet solos. The Dunbarton is cheddary with a blue warble; it’s a firmer, more charismatic cheese than Bloomin’ Idiot. The longer I let Bloomin’ Idiot sit, though, the sweeter and softer it became. Mmm...smarvelous.

Full Disclosure: Both of these cheeses were mailed to me as samples from the Wisconsin Milk Marketing Board.

Posted by Madame Fromage at 9:18 AM