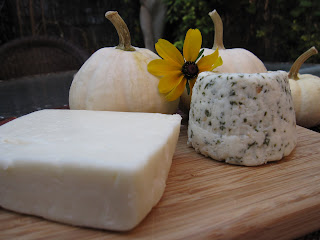 Here’s my deepest fear: discovering I’m lactose intolerant. Gulp. Every few weeks, I hear from someone I know who has been given this diagnosis, and I shiver. At least I could still eat goat cheese, right? According to Elly Hushour, humans can digest goat’s milk in 20 minutes, while cow’s milk takes an hour.

Hushour is the cheese mistress of Patches of Star Dairy, a goat farm in Nazareth, Pa. that is licensed to sell raw milk. I met her this morning at the Headhouse Square Farmers’ Market in Center City Philadelphia; her arm-length loaf of goat havarti – a new product –stopped me in my tracks. 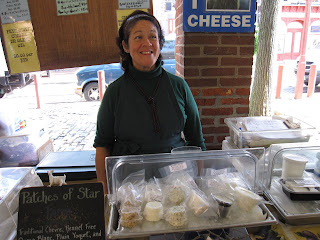 Hushour started making goat cheese back in the mid-80s when she was a new mother. She read about the nutritional value and easy digestability of goat’s milk and began experimenting with recipes. Today she produces a variety of raw milk-certified yogurt, ice cream (woo hoo!), and cheeses, including Queso Blanco and the only domestic Halloumi I’ve ever seen.

I also tried the Garlic Parsley Queso Blanco, which Hushour recommended as a topping for pasta (crumbled on top of noodles with black olives, she said). I liked the herbiness of the cheese, and, okay, I have a weakness for any cheese that’s shaped like a wigwam. But I’ll go back to the havarti again. It’s outstanding.

If you want to try Patches of Star cheese, you’ll have to haul butt to Headhouse Square, because Hushour only sells directly to her customers. Or you could drive out to Nazareth and check out her rotational grazing and her goats, who are fed on sunflowers. 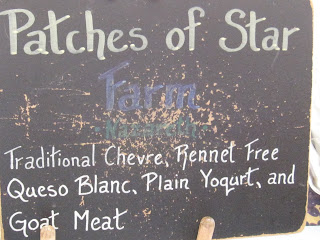 Posted by Madame Fromage at 2:50 PM