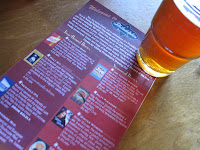 A few weeks ago, I heard from a reader who wanted a cheese pairing for a smoky beer, a beer he described to me as "bacon in a glass." Turned out this reader was a tour guide at Philadelphia Brewing Company, home to one of my fave local ales, Walt Wit. So, last Saturday, I decided to pick up some sharp cheese and shimmy over to the brewery to meet the local readership -- and, of course, to enjoy some sips. 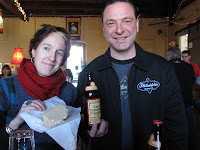 Turns out, Philadelphia Brewing is just about the best Saturday-afternoon fun I never knew existed. From noon 'til 3, the brewery offers tours and free samples of all their beers, including some that never make it to market (I was especially fond of "Kilty Pleasure," a Scotch Ale made with heather and hops). The scene was electric: the jukebox was rockin', the dart board was lit up, and even a black-and-white cat was on the prowl. 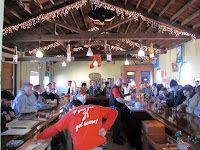 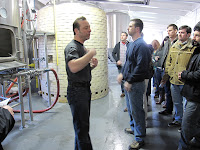 My reader, David April, showed up with three bottles of his German "rauch bier," and I presented him with a nice wedge of extra sharp Provolone from Dattilo's, a great little Italian deli in the Northeast. Ideally, I would have brought a bandaged cheddar to pair with this bacony goodness, but the Prov stood up to the intense flavor of the beer. When you age provolone -- which is a wimpy cheese, let's be honest -- it gets oniony, and I liked the idea of putting onion and bacon together. Makes me think of hot bacon dressing.
Next time, I promised David, I'll bring some PA Noble, or an English cheddar. I have a hunch that the Natural Horseradish Cheddar I picked up from the LeRaysville Cheese Factory could be appropriately brash, but I'd also be curious to try the rauch bier alongside a smoky blue, like Rogue River Blue from Oregon, for a real smoke-off.
Here's the good part: Philadelphia Brewing Company has eight beers on tap, including a Fair Trade Coffee Porter, so that means I'm going to have to go back at least eight times and take new cheeses to pair with all of them so that I get, ya know, practice match-making.
In the meantime, I have a few cases at home now so that I can run some experiments. 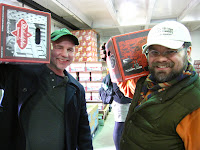 Posted by Madame Fromage at 4:32 PM