Strathdon: A Blue for the Beach 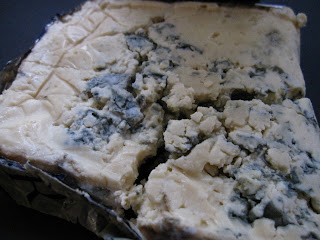 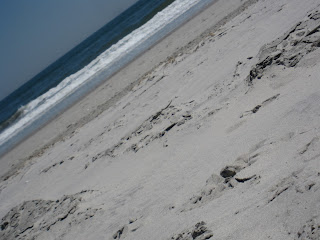 If ever there was a blue cheese destined for ocean-side enjoyment, it’s Strathdon. It even sounds like the name of a beach – much better than Stichelton Shores or Roquefort Cove. Yes, Strathdon Beach. I think I’d like to have my ashes scattered there.
I picked up this wedge as an accompaniment to a bottle of oyster stout I had cooling in the fridge. Lucky me, my cheesemonger knew the beer and said, “I have just the thing.” He disappeared behind the counter and rose again with this salty blue, assuring me it had a hint of the seaside.
“It’s from Scotland,” he added, and this clinched it, because as you know, I have a dotty Scottish friend who I adoringly call the Blue Cheese Brit, and he was coming to dinner. I darted home, called together my cheese hounds, and soon we were glugging stout and gorging on cheese, and it was like a beach party without the sandy legs and the smell of Coppertone. 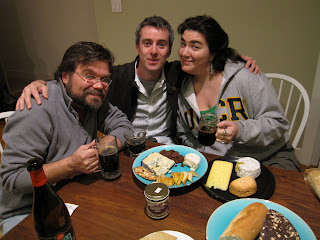 “That blue told me it was taking me home tonight the minute I walked in the door,” the Blue Cheese Brit bellowed as soon as he carved off a bite. Then he moaned, turned flustered, and whispered, “Silk on my bare skin.”
The Blue Cheese Goddess, a.k.a. Future Federal Defender Tracy Tripp, had to translate as the Brit fell onto the cheeseboard, scratching for more. “I taste Scottish sea cave," she said, "with slate on the front end.”
The monger was right. Strathdon was glorious with Flying Fish’s Bayshore Oyster Stout. The malty and salty, it just doesn’t get any better.
Posted by Madame Fromage at 5:43 AM