On Saturday, we set out the cheese. Each one had been painted. Mike Geno, the artist, had his own cheese board displayed in a studio off the back of his loft apartment.

The photo is a little dark, but you get the idea. Mike has spent the last several months in a Zen cheese zone.  On Fridays, he and I would walk to cheese shops across Philadelphia, in search of the most aesthetically pleasing wedges. He liked crags and texture, like this wedge of Strathdon Blue. 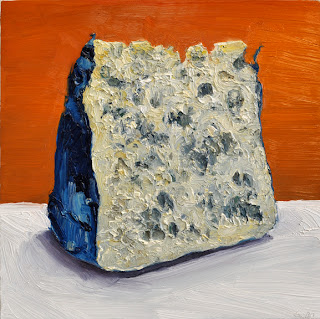 It's one of my favorites -- a Scottish beauty, full of beachy flavor. The cheesemaker, Ruaraidh (pronounced "Rory") Stone, makes this cheese in an old brewery right along the Scottish coast, and he claims you can taste the sea in his cheese. I think it's true.

Mike captured the beauty of cheese in his portrait series. When I look at wedge of Manchego now, I can't help but study the rind.

Even Mimolette, with its moonscape exterior and annatto-tinged interior -- so waxy and weird -- has become more intriguing.

We had a lot of fun showing people how to see (and taste) cheese in new ways at our secret studio tour. Lots of you showed up in your Saturday best, matching red shirts and all.

Kisha, you even brought your cheese journal. Splendid.

There were other notables, like Albert of Messy & Picky fame, who works at the Fair Food Farmstand. He was the first cheesemonger I ever met when I started in on this fairytale. (After the party was over, he gave us a demo on how to wrap cheese like a professional.)

Debbie and Fred from Amazing Acres showed up to view "Sea Smoke," a cheese they used to make. Ahhh, Sea Smoke.

It was fun to watch people's reactions as they nibbled cheese, then went to view it in the studio.

Along with all of Mike's tchotchkes.

Here we are, at the end of a happy day.

Mike's cheese portraits will soon be on display at Cakespy in Seattle. If you want a preview, visit his flickr gallery. You can always find Mike at mikegeno.com.
Posted by Madame Fromage at 8:18 AM