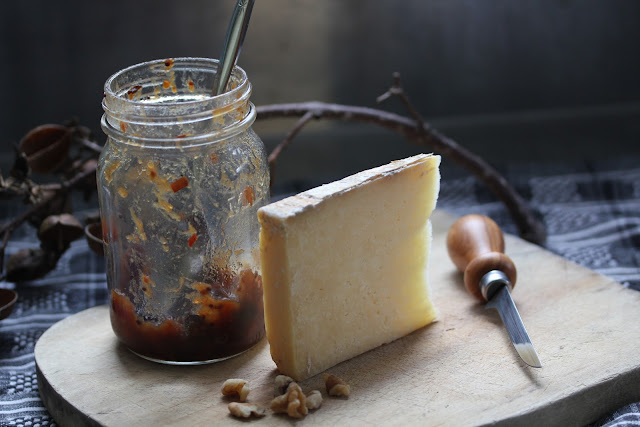 Sometimes, a cheese makes its way into my handbag simply because its name is irresistible. So it was with Mrs. Kirkham’s Tasty Lancashire, a mellow raw-milk cheese with a wistful cheddary nature.

When I sampled it at the cheese counter, I thought to myself “meh.” But Zeke the Cheesemonger was so giddy about it, and I had such a bad case of Indecision that I bought half a pound simply because it appealed to my bookish nature.

Mrs. Kirkham’s Tasty Lancashire – it sounded very much like the sort of cheese one might eat while reading Bronte on a gloomy afternoon.

Two days later, I found myself hosting a harvest soiree, complete with a goat-horn drinking carafe. What luck to have some Mrs. Kirkham’s TL on hand, along with a spot of chutney.  It proved to be the hit of the party.

“It’s crumbly, like a good muffin,” remarked my friend Tracy, who shares my love of whiffy washed rinds. “If it were a cake, I’d say it had a fine crumb.”

We marveled not just at the taste – which was very delicate, milky and lemony – but also at the texture. The curds of Mrs. Kirkham’s Tasty Lancashire are ground up like sausage. The result is a moist, nearly fluffy cheese that breaks apart like individual snow flakes on your tongue. 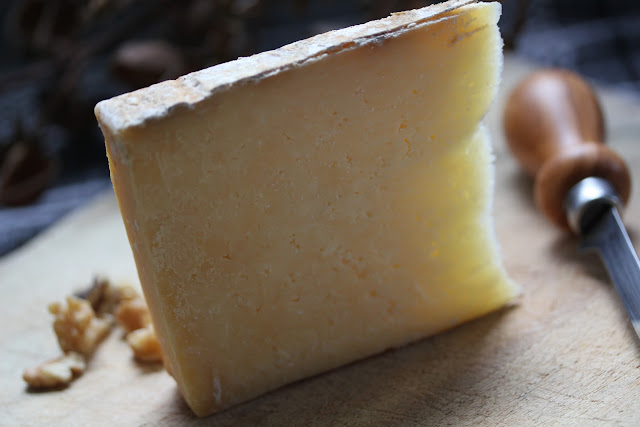 “The texture is extraordinary,” commented the Blue Cheese Brit, who has a penchant for aggressive cheddars. Despite his former carefree life in London, the Brit was new to Mrs. Kirkham’s Tasty Lancashire. Curious.

I scoured my cheese library for a bit of history. Wouldn’t you know that Max McCalman had the skinny?

Lancashire is an age-old style of cheese, originally developed by British farm wives who saved the curds from several days of milking and combined them to form a single wheel. Since the curds ripen at different speeds, a unique taste forms. Think of it like pot pourri – lots of bits, assembled to form one lovely scent.

In the ‘40s, production of Lancashire dwindled, and now there is just one maker who still produces traditional Lancashire. That maker is Mrs. Kirkham – well, her sons run the business at this point, but their cheese is named in honor of their mother, Ruth.

One other factor adds to the glory of this cheese. Once wheels are formed, the rinds are smeared with butter. Perhaps this is why Mrs. Kirkham’s Tasty Lancashire reminded our party of muffins. It’s hardly a cheese at all, more like a pound cake – perfect for a Charlotte.

Note:  The U.K.'s Daily Mail just published a list of 8 under-the-radar British cheeses. Worth a glance and a sniffle. I see Lord of the Hundreds listed, a sheepy devil I tried at the Fancy Food Show but never see on shelves. One can only mewl.
Posted by Madame Fromage at 6:51 PM