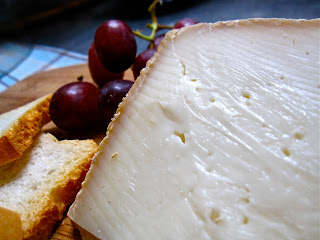 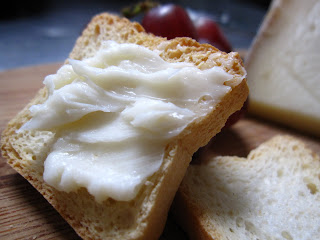 Several months ago, while house sitting for our friends Noel and Carolyn in New York, I went through their cheese drawer – that’s right, some people go through bedroom drawers, I go through refrigerator drawers. One wedge intrigued me, a Spanish sheep’s milk cheese with a label that included “thistle rennet” among the list of ingredients. I filched a nibble and was transformed. This was an aromatic, vegetal cheese with a gooey center and a spiky aftertaste. Was I tasting thistles?
“La Serena” I typed into the notepad of my ipod.
For months now, I’ve been on the hunt to acquire my own wedge and to learn about cheese made with thistles. I’ve read up on rennet, which is an enzyme used in cheesemaking; often, it’s taken from the stomach lining of animals, but more and more cheeses include “vegetable rennet,” a coagulant that’s been introduced to appeal to vegetarians. Vegetable rennet is produced in labs, something purists pooh-pooh. Thistle rennet sounded sexy. It sounded natural.
In a curious twist of synchronicity, I found a wedge of La Serena at a local market the same week I received my latest issue of Culture Magazine, a new cheese rag with fabulous photo spreads. The cover story? Thistle Cheese.
So here’s the dealio: thistle rennet has been used in cheesemaking since ancient Roman times. Now, it’s used primarily in Spain, where it has evolved from cheeses that were made high in the Iberian mountains, thanks to some clever shepherds. The rennet actually comes from cardoons, those purple-tufted mega-thistles you’ve probably seen growing along roadsides. The stamens are steeped in warm water to make a “tea,” which is then added to the milk.
Amazingly, there isn’t a purple twinge to La Serena, but I thought I could detect the faint taste of artichokes, which are related to the cardoon. The cheese has a long-lasting sharp taste, like raclette, but its texture is much softer. If you let La Serena sit out for an hour or so, you can dip bread into it fondu-style. Beware the smell, howev, which calls to mind moldering grapes. It’s whiffy but wonderful.
Posted by Madame Fromage at 7:25 AM