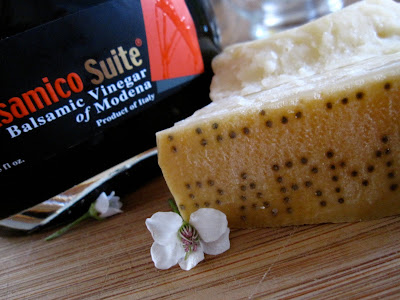 Since my last post, several of you have written to me about the cheese that stars in my steamy Youtube video. Friends, it's no ordinary Parm. It's aged by Giorgio Cravero, a 5th-generation cheese man in Bra, Italy. Moist and sweet, Cravero's Parmigiano Reggiano is a classic pairing for aged balsamic, the other heart-stopper in the film.

When I started looking for a Parm to play the lead, I asked around at a number of cheese shops. Turns out, there are over 500 producers of Parmigiano-Reggiano in and around Parma and Bologna. Many are mass-produced, bur Cravero's is not. He selects the best wheels from a number of small family producers, then ages them himself, producing a grand total of about 9 wheels per day. "Miniscule," said Ezekial Ferguson, a knowledgeable South Philly cheesemonger.

When Zeke passed me a sliver, I knew Garbo had found her Astaire. This is a cheese with umami. My nibble was sweet, nutty, full of crispy amino acid crystals -- the sign of a well-aged cheese. Midway through the bite, Cravero released a faintly pickly taste, a thrilling twang.

I knew Zeke was right. This was a cheese that would pair well with a plummy aged balsamic.

This particular bottle of Balsamico Suite is my first grown-up bottle, I must admit. I sampled some cloying, syrupy versions in the $20-$30 range before I fell swooning to the floor over this one. I love its choclatey notes, its velvety feel. It tastes like a cross between port and pickled ginger. When you eat it with this Parm, your mouth goes from nutty-sweet to tangy-salty to bitter-dark chocolate in a wave.

Glorious. I can't think of better tub mates. I may get a mini fridge for the bathroom.
Posted by Madame Fromage at 12:33 PM