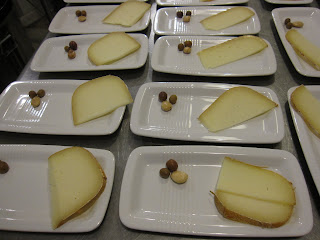 Last night's tasting at Quince was full of drama. The basement flooded, the power snapped off, and some of our guests got stranded in the rain. But with a few candles and some deep breathing, we prevailed. One of the brewers from Philadelphia Brewing Company, Dean Browne, still managed to traipse over to join us, and so did David April, leader of the Fishtown Beer Runners. And so we drank beer and ate cheese, and we learned a few things about hops and estrogen -- like that IPAs are good for the ladeez. More on that later.

Here are our three pairings, for those of you who stayed home and nibbled brie in bed:

Cheese: Ossau-Iraty
Ale: Rowhouse Red
This sheep's milk cheese from the Basque region is mild and fruity with an aroma of freshly milled wheat. Traditionally, it's served with cherry preserves, so we gave a nod to that sweet, tart pairing by pouring a red ale along side it. With a few olives and Marcona almonds, it made for a mellow, well-rounded combo. 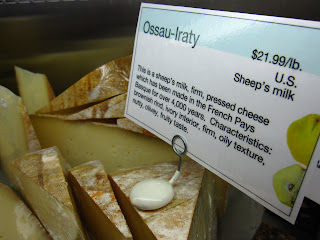 Cheese: Humboldt Fog
Ale: Walt Wit
Our favorite pairing: the citrusy notes in this unfiltered Belgian wheat ale cozied up so nicely to this slightly acidic, perfectly balanced goat cheese, easily recognized by its layer of ash (the ash is supposed to represent the coastal fog near Cypress Grove in Humboldt County, CA where this cheese is made). Joan and Nicole served each plate with a shard of Rosales torta, an olive oil cracker that tastes faintly of anise and burnt sugar. 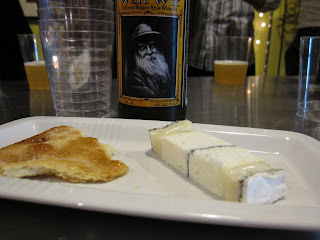 Cheese: PA Noble
Ale: Newbold IPA
Bitter beer calls for sharp cheese, so we played on this pairing rule by selecting a local cheddar-style cheese made from raw, grass-fed milk right here in Pennsylvania. We think this local cheese from Green Valley Dairy is stellar, and we were excited to pair it with a local brew. This cheese pulled honey notes out of the IPA, and it was terrific served with mango chutney from Stonewall Kitchen. 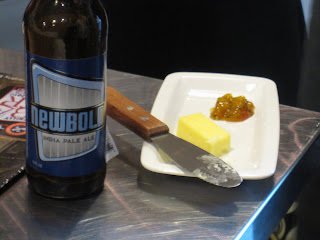 All of these cheeses are currently available at Quince Fine Foods, and you can find PBC beers at most distributors around Philadelphia or buy it directly from the brewery, which is open for free tours and tastings every Saturday, noon-3 p.m. I visited back in January, and I have never been the same. I'm drinking those hoppy beers all the time now, ever since brewer Dean Browne told me that the estrogen in hops are good for women's bones.

Ladeez, maybe I'll see you at the bar. I'll be the one with the cheddar and chutney. 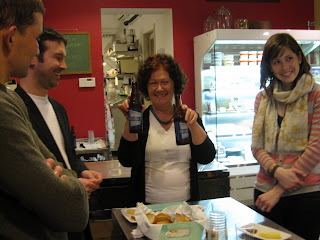 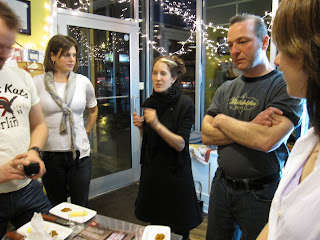 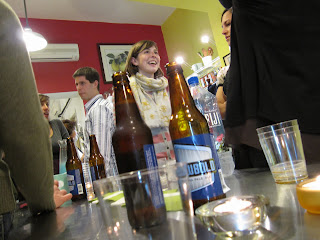