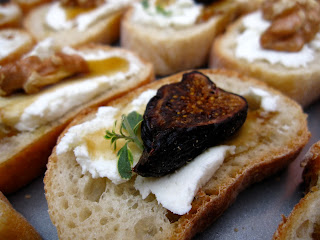 Last night, my friends Cat and Ben hosted a birthday fete for our mutual friend, Shanta. It was a steamy night here in Philly, and I wanted to bring along a cheese that would be cooling and yet fabulous, since Shanta is a sharp-cheese lovin' gal.

Chevre and buckwheat honey. There was no other choice. What else says "rust and resurrection"? What other pairing could bring together light and dark, new drywall and exposed brick?

I love Shellbark Hollow's Sharp Chevre because it is a creamy goat cheese with depth, with feistiness. It tastes apple-clean and yet rich. Drizzle it with some toasty buckwheat honey, and this cheese gyrates. 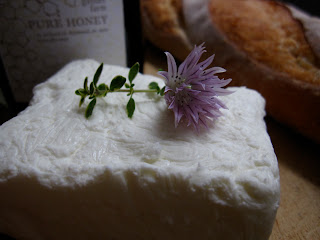 My bruschetta were gone in seconds, and they were so simple. I made two kinds: toasted walnut and fig. Incorporating fresh lemon thyme from the garden was a last-minute burst of inspiration -- a green kick to brighten those dense little figgies. And the toasted walnuts -- mmm, baritone goodness.

Shellbark Hollow makes a variety of goat cheeses, including fresh chevre, crottin, marinated goat biscuits, and herbed chevre spreads. You can find their products at Headhouse Square Farmers' Market and the Piazza Market. I bought mine at the Fair Food Farm Stand, along with the honey from Two Gander Farm in Berks County.

I don't know of anyone besides Shellbark's Pete Demchur who makes Sharp Chevre. When I talked to him a few weeks ago, he said it was his specialty -- his personal fave. Donna, his wife, told me she loves to serve it with sliced Asian pears. It's a great choice for anyone who finds plain chevre a little too mellow. I think the Sharp would be great to cook with, especially as a topping for grilled meats, bitey salads made with watercress, and as an accompaniment to olives and fresh herbs.

All I know is, Shanta's friends liked it. 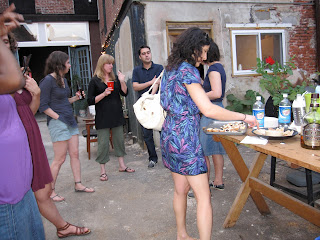 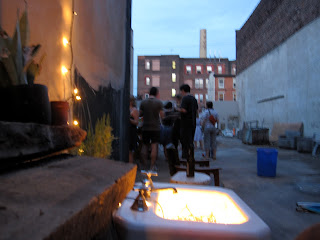 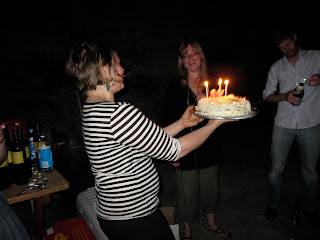 Posted by Madame Fromage at 6:49 AM