From Lombardy with Love

My friend Stephanie Patrizio quit her job to spend the summer in Florence, learning Italian. When she told me of her plans, I cheered her on and asked her to send me periodic cheese reports. Below is Stephanie’s latest cheese adventure. Oh, how I love having a foreign correspondent. 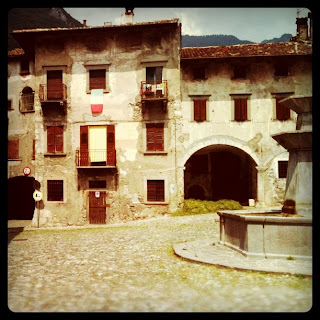 Living in the beautiful city of Florence, one is exposed to some of the most beautiful art and sculpture in the world. The Duomo, the David or the Arno at sunset would take anyone’s breath away. But for me, the most exhilarating moment was when I walked into a 500-year-old cellar filled with beautiful homemade Italian cheeses, just outside of Bergamo.

My friend, Julia, has been living in the charming town of Villa d’Ogna for about 2 years, although her family has lived there for generations. To get away from the busy streets of Florence, I traveled to Lombardy to visit her.

Julia and I bonded years ago with our love for our Italian heritage and, of course, cheese. So when she told me that she was bringing me to a place she called ‘the cheese vault,’ I was more than a little excited.

The moment I stepped in front of Franco’s house, I knew this was going to be a unique experience. 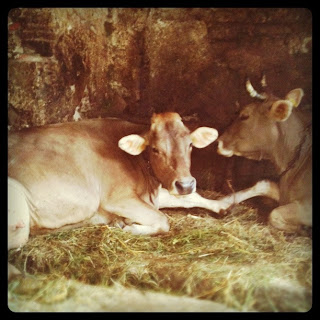 The cows were relaxing in the shade, the fresh grasses they ate were piled on the doorstep, and when I asked Julia, ‘What do we do now?’ she simply said, ‘We ring the doorbell!’ Her boyfriend, Marco, a man who is the true definition of Bergamasco, came as our translator since Franco’s dialect is so thick. Months of Italian courses couldn’t help us now.

Franco appeared in a window, fresh out of the shower. I expected him to send us away, but this was apparently part of his daily life. He came downstairs and led us to a small wooden door next to the cows.

This is when I really started to get butterflies. 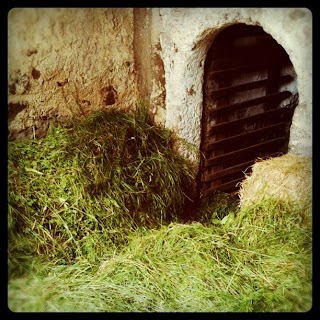 When he opened the door and led us inside, my mouth dropped. A cold breeze hit my face as I stepped into the dark cellar exposing hundreds of wheels of cheese lining the walls. Young cheeses, old cheeses, cheeses made from sheep, cow and goat. Being only a cheese lover rather than a true enthusiast, I suddenly wished I had enough knowledge to know exactly what was in that cellar. There was an enormous scale in the corner, a small working desk surrounded by shelves of cheese (where can I get one of those, West Elm?), and an old gorgeous slicer.

There was too much to look at, and I could tell there was never going to be enough time. This was Franco’s job, not a tourist attraction, so I smiled and hoped the excitement in my eyes would help all the sneaky picture taking. 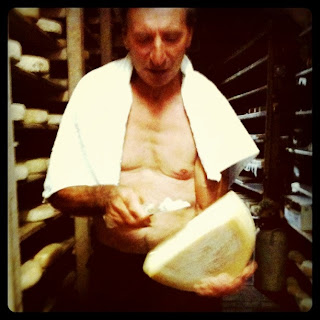 He cut a fresh wheel and asked me to try a cheese called ‘Formaggio di Monte’ (cheese of the mountain), made by Franco himself only 4 months earlier from the cows who were right outside the door. He sliced a piece the way any proper Italian man slices anything, using the knife to meet his thumb. Its perfectly salty fresh goodness melted in my mouth. All I could get out was a nod. I bought almost a quarter wheel for 5 euro, knowing anywhere else in the world it would be more than double the price.


Franco became a movie star to me and I became a blubbering idiot in the face of stardom. I’ve known how to say ‘what is your name?’ for years but all I could get out was ‘tu…. chiama….’ I said grazie what felt like 50 times and went back out into the daylight.

It was afterwards, after a feeling of having 4 espresso, I asked Marco for the details. 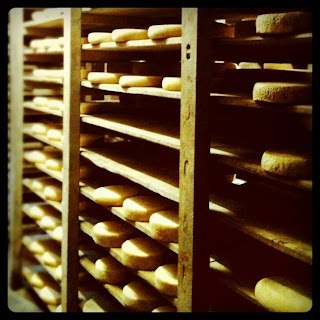 I carried the cheese in my purse all the way back to Florence and placed it in the fridge. The next day I broke off a chunk for my local cheesemonger (any respectful Italian woman has one of those) and asked for advice on pairings. Upon instruction, I let the cheese sit for 2 hours, bought some fresh bread and prosciutto from the market, and waited anxiously.

I always enjoy trying cheese first by itself, to capture each moment of flavor. I suppose the phrase ‘the cheese stands alone’ has a different meaning with a more refined palette. When the cheese was ready, I made a simple plate. It was just as delicious as the moment I tasted it in the vault. It was soft, mild, and milky, and then it kicked you in the tongue at the end. The salty ham for a chaser was more than perfect.

As I enjoyed the rest of my meal, all I could think was, ‘The David ain’t got nothin’ on Formaggio di Monte.’

Posted by Madame Fromage at 8:48 AM