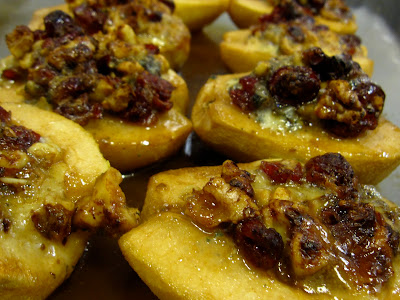 The highlight of our last tasting at Quince: these luscious Anjou pears stuffed with blue cheese, cranberries, and walnuts -- basted with cider-port sauce. We even managed to convert a tentative cheese eater with a new French boyfriend (she attended the tasting on the sly, while he was out of town).

Because blue cheese makes some people nervous, we selected a mild temptress, Bleu d'Auvergne. However, you could ramp up the blue flavor by using Stilton in this recipe. Serve these pears on a bed of greens at Thanksgiving -- that's my plan. They are a little bit salad, a little bit dessert, with a nod to the world of stuffing. Perfect.