Last week, I received an interesting request from a reader named Mike Geno. He wanted my help selecting “attractive cheeses” – not to eat…but to paint. As a sample of his work, he sent me a jpeg of the image above.
“A cheese painter?” I hooted, as I stood on the subway, reading his message. Then I opened the jpeg and squealed. Gorwydd Caerphilly! One of my favorite wedges! Within a few hours, Geno was in my kitchen and we were matchmaking. Man+cheese.
Geno lives in my neighborhood, turns out, where he’s known as “Meat Man Mike.” A former butcher, he started painting steaks and cutlets after he graduated from art school, and now his career as an artist who paints food has taken off. He also curates a meat art blog, no joke. Check out his bacon drawings -- they are strangely alluring, as beautiful as koi.
In June, Geno will present an all cheese show at the Seattle gallery, Cakespy (after the blog of the same name). Given the recent crackdowns on raw-milk cheesemakers in Washington state, this couldn’t be any more timely.
In fact, I gave Geno my last sliver of Renata from cheesemaker Sally Jackson. Now that Jackson is no longer in business, I thought maybe a tribute to her 30 years of raw-milk cheesemaking might be cool to include in Geno’s show.
Turns out, he thought so, too. Here’s what he painted two days later: 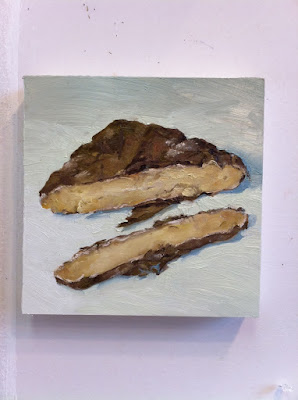 I’ve promised to chronicle Geno’s cheese show as it progresses. If you know of beautiful cheese he might consider painting, drop me a comment. Mike and I are planning to do a tour of some Philadelphia cheese counters next week.
Incidentally, this is the second cheese-related art show I've heard about in the last three months. In December, the awesome cheesemonger Anne Saxelby hosted an art show titled "The Milk is the Medium" in Manhattan's Essex Street Market. It featured works by Hannah Sessions and Greg Bernhardt, a pair of painters/cheese makers who marry art and agriculture.
Gorgeous. Feast your eyes.
Posted by Madame Fromage at 12:10 PM