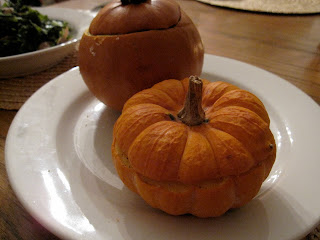 Today's cheese tasting at Quince is sold out! Yee-haw. Here's the recipe I'll be sharing for a quick Thanksgiving side dish. It's adapted from a Deborah Madison recipe that I've had marked for about the last three years.

I tested several versions last weekend, using different cheeses; the original recipe called for gruyere, but that got gluey when baked. The blue cheese melted beautifully, combining with the cream to form a piquant cheese sauce that was a pleasant contrast to the sweetness of the pumpkin.

You can use ornamental pumpkins for this dish – yes, the squat, ridged ones that most people use as decorations. Several people at my local farmers’ market expressed skepticism about this idea, insisting that these squash were merely decorative, but I baked them up, and they tasted wonderful – similar to acorn squash in flavor and texture. In fact, they were tastier than the small pie pumpkin I also tried for this recipe.

The nice thing about this recipe is that you can adapt it to the number of guests at your table, and very little prep is required, other than slicing off the caps of the pumpkins and scooping out the seeds. The presentation is simple and memorable – who will forget the year you served baby pumpkins stuffed with blue cheese?

Preheat the oven to 350 degrees and slice off the top of the pumpkin, scooping out the seeds. Rub the inside with a dash of salt. Pour in the cream, cheese, and add several cranks of black pepper. Replace lid and bake in pan, 45-50 minutes. Serve hot.

*I used Roaring Forties Blue, which is on the sweet side and very creamy. Hook’s Blue Paradise (from Wisconsin) or Cashel Blue (from Ireland) would probably be comparable.

Posted by Madame Fromage at 6:00 AM