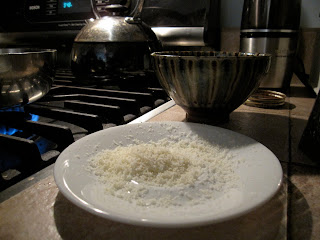 I’ve been having a renewed love affair with Parm ever since I learned to make omelets last week from a pair of former monks. It was the kind of evening I love: a big dinner out, a few drinks back at the house, followed by a kitchen dare. In this case, the dare ended with a vigorous round of omelet-making at about 10 p.m. on a Thursday accompanied by a little scotch. I’ve been making omelets with fresh herbs and Parm ever since.

So, a little background. Our omelet man is a former Trappist who left his abbey a few years ago to work in a fine restaurant kitchen. I’d heard about his omelets from my friend Gerard (a former Benedictine), who loves to regale me with food stories, usually over a cloudy glass of Pernod. Gerard has often said to me, “There’s no better dinner than a perfect omelet, and no one makes omelets like my friend Jeff in Colorado Springs.”

When Jeff the Trappist came to Philly to run the marathon recently, I knew I had to see his omelet action. After all, how good can an omelet be? To me, it has always tasted like a potholder – one of the least enticing dishes on a menu and something I rarely attempt unless I am in a bitter mood with poorly behaved guests over for breakfast.

Jeff schooled me on The Omelet. And I have been practicing every night.

The key to a stupendous omelet is, apparently, a decent omelet pan (Jeff recommended a small All-Clad frying pan), a couple tablespoons of canola oil, and a pat of butter. You brown the butter in the oil, essentially, so that you get the taste of butter without burning it at high heat. Jeff kept sniffing at the bubbling pan until it smelled right to him – and when the fat was at a super-sizzle, he dropped in a pair of whisked organic eggs, and I stood back as that yellow liquid puffed up like a butterfly. 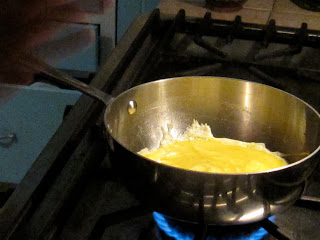 Then, Mr. Trappist Omelet shook the pan vigorously over medium heat, fluffing the eggs for about 20 seconds, before adding a sprinkle of Parm, a pinch of salt. Within a minute, he’d tumbled the whole thing into a pretty fold, plated it, and topped it with black pepper. 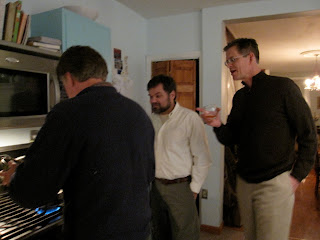 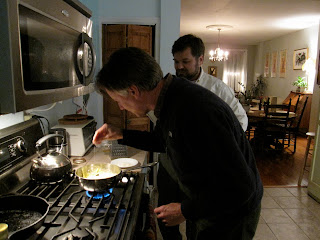 It was the lightest cloud. I nearly wept.

Monsieur Fromage and I have gone through two cartons of eggs in the last week. We have cleaned a lot of splattered yolk off the kitchen burner and spent a lot of time at the sink, working up to a flip. Our omelet-offs are always hair-raising, and usually there is some shouting, and the dog darts to her kennel, and I get very bossy and Monsieur Fromage scowls, but then we sit down with knife and fork and bite in, and we get very settled looks on our faces. An omelet is such a mood-mellower.

Well, a good one.

We are still approximating the Omelet Monk’s fluff-master-deluxe level of virtuousity, but we are getting very close. When our omelet doesn’t end up on the floor, it tastes buttery and so light, much more like a quality bed ruffle than a potholder. The Parmigiano-Reggiano is, secretly, what makes it. I always keep a plate of it freshly grated on the top shelf of the fridge now. Actually, it’s just past ten – a perfect time to crack a couple eggs and work on my serve. 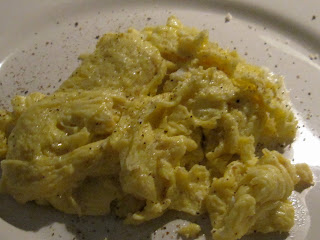 Posted by Madame Fromage at 7:35 PM