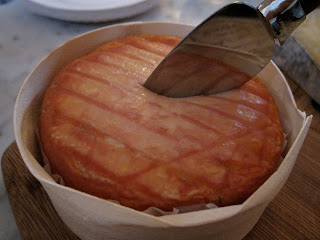 The star cheese of our Thanksgiving plate was a little French wheel washed in brandy. I’d read about it in The Cheese Primer, in Murray’s Cheese Handbook, and in a book on pairings by Janet Fletcher, Cheese and Wine. Here was an old monastery cheese that was rumored to taste like meat and garlic, an Old World stinker perfected by monks. Époisses is also rumored to be banned from French trains due to its smell.

So, I expected a real whiff-burger, but my wheel of Epoisses did not stink up the fridge. And it did not offend our brazen band of dinner guests, who spent a whole afternoon eating and drinking around the cheese board while Monseiur Fromage prepared his time-consuming “Turkey in a Shroud.” The real key, though, was pairing this cheese with a great wine. Wow, the white Burgundy that several Internetters recommended brought flavors out of this cheese that were absolutely novel to witness. Rarely have I enjoyed such an optimal pairing. 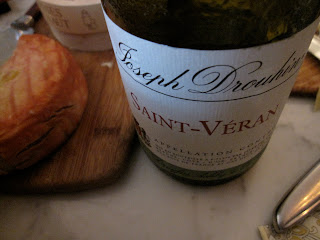 We drove to New Jersey to find a bottle of 2008 Joseph Drouhin Saint-Véran (about $15). Cooled it on the back stoop, brought the cheese to room temperature, and let our couch-clan of tasters descend. The response was YouTube-able; a sip of wine after a nibble of Epoisses had everyone’s eyebrows on the ceiling. “Oh my god,” exclaimed our Blue Cheese Brit, who had just arrived with a bag of delicious patés and cheeses under his arm.

With all the hype, Époisses may sound scary. I found it surprisingly tame but perfectly balanced. It’s a bit whiffy, but only when you take it out of its round package – the fragrance calls to mind onions, mushrooms, a damp carpet of leaves. The taste, however, is wicked; think of a brandy-spiked venison pate, then add a velvetine mouthfeel, and give it a tangy orange rind.

Wine-and-cheese guru Janet Fletcher recommends serving Époisses with a Riesling or a Dry Pinot Gris, while others suggest a Cab. Frankly, I would never serve it without the Saint Véran white burgundy we enjoyed over Thanksgiving. It was truly…it sounds canned, I know…but I mean it: astonishing.

Other highlights from our Thanksgiving cheeseboard:

Keen’s Cheddar: a flawless raw-milk farmhouse cheddar that our friend, the Blue Cheese Brit, calls his old steady. He says it’s “a must” in any gentleman’s crisper.

Forsterkase: A bacony-flavored, washed-rind, raw-milk cheese from Switzerland that is cured in spruce bark. Yes, bacony! This is a fantastically heady and bizarre cheese that calls to mind hunting lodges and men wearing wineskins into the woods. The rind looks like a dirty hiking boot but is whack-delicious in a herdsman kind of way. 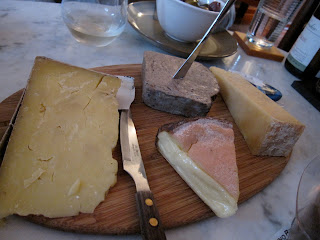 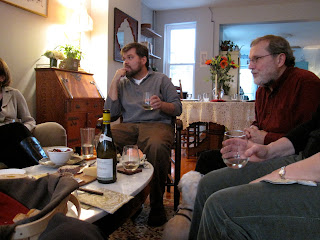 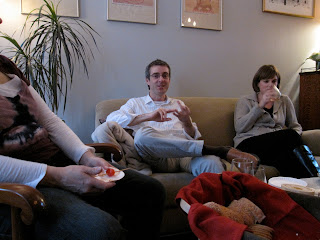 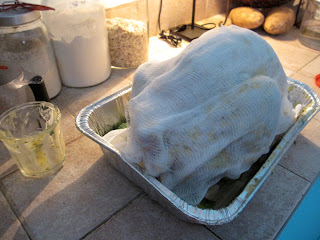 Yes, yes, that is the famed "Turkey in a Shroud." There's our bird after two days of marinating in a mustard rub. The cheesecloth shroud was draped over her at half past twelve, and she was basted every quarter hour, which meant that she wasn't ready until almost 7:30 p.m. Was she a fine bird, our little Nefertiti? Oh, she was.