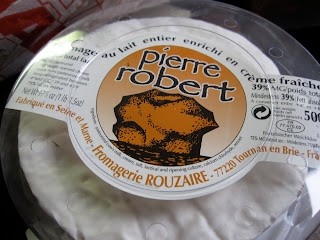 I’ve never been a brie freak, probably because brie is the hummus of English departments, and I overloaded on it at mixers during grad school. So often brie is rubbery, flavorless – glue on toast. I almost never buy it unless I am hosting people I don’t know well, then I figure it will be a pleaser.

Today, however, I took a whole wheel of Pierre Robert, a French triple-crème, into my Fiction Workshop – an exceptionally good class this year. I felt it was time to induct these 15 students into the world of cheese now that they’re seniors. And, come on, eating brie is an English major’s rite of passage. I wanted them to sample the good stuff.

Pierre Robert was recommended to me by a local cheese maven, and her recommendation was spot on. I’ve been reading a lot about Brillat-Savarin lately (also a triple crème), which I’ll be serving this Saturday at my first public tasting. From everything I’ve read, Brillat-Savarin is body butter – rated #2 sexiest cheese in my Murray’s Cheese Handbook. So, I was curious to see how Pierre Robert compared.

Mmmm…it was decadent. Pierre Robert has the texture of a mousse, dense and yet light. The rind melted on my tongue – not the least bit rubbery. And the flavors were more potent than I’d imagined, grassy and peppery. I’m still a stink-bomb lover – the blues have it – but I will buy the Pierre Robert again, for picnics, for hot-night desserts. Bring on the champagne, or, as one artisanal cheese site recommended: Tequila Sunrises.

My students definitely passed the brie test. Honestly, I thought they’d find the mold off-putting, but they descended on this snow-white cake like a pack of writers, which is to say, like wolves! Even the box went out the door under one person’s arm. So, I guess there will have to be more cheese inductions for senior English majors. Maybe I’ll work up to a salty wedge of tongue-numbing Cabrales. 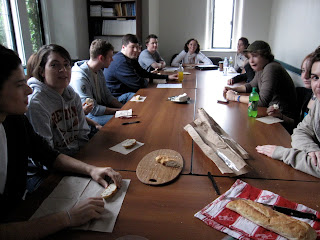 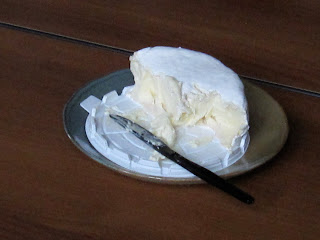 My mind is working on a list of cheese-and-writer pairings – hmm…what cheese would go well with Joyce Carol Oates?

Posted by Madame Fromage at 5:36 PM