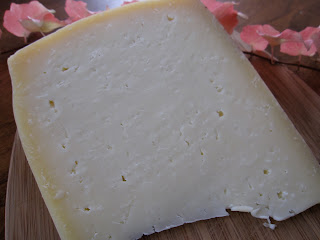 On Friday, I made a great discovery: there’s a cheese importer in my neighborhood. Tucked amid the row houses, two unmarked garages function as a wholesale warehouse for International Food Distributors Inc., a company that’s been in business since 1939. I can’t believe I’ve been walking my dog down this block, past coolers full of triple-creams, shelves of stilton and manchego. Somehow I have to believe that this is not just a coincidence, that it’s destiny.

Trugole, a beautiful cow’s milk cheese from the Piedmont region of Italy, was one of the cheeses I tasted on Friday, when I toured International Food Distributors in preparation for next weekend’s tasting. Nicole Marcote, of my local cheese shop, Quince, was kind enough to make the introduction.

I spent an hour in the cooler with a broad-shouldered she-Viking named Jayne, who was kind enough to school me on some of her favorite cheeses, including this one, a staff-favorite at International Food Distributors. In fact, when Jayne took the wheel into the cutting room, about five people appeared, noses in the air, sniffing. “Is that Trugole?” each one asked.

Trugole is a sharp, sweet cheese with a lingering taste of caramelized onions. The texture reminds me of an aged Provolone, but the taste is more characteristic of a Parm or an Asiago. When I served it tonight, alongside lagers and pickles, Monsieur Camembert exclaimed, “This would be good in a plowman’s lunch.”

There is something infinitely snack-worthy about Trugole. It’s full-flavored and fruity, and it pairs well with just about anything – fruits, nuts, olives, cured meats. It was especially good on a sesame-crusted baguette.

Trugole (pronounced True-goh-lay) comes from the foothills of the Alps, where the mountain grasses and foliage must be heavenly, because the sweet notes in this cheese are out of this world. This is a washed-rind cheese, and for every day of Trugole’s 60-day aging process, the wheels are turned and sprayed with water and salt.

The result is a pleasantly sharp semi-soft cheese that I think would fit nicely on the Thanksgiving table, especially if you have risk-averse friends who might shy away from stinkier business. Trugole would be a great mediator – a cheese to impress the foodies and the non-foodies. And it melts well, which means it would be great at midnight when you are contemplating a grilled turkey sandwich and scrabbling about the crisper for a cheese that can hold its own against layers of cranberry sauce and gravy.

Posted by Madame Fromage at 5:14 PM