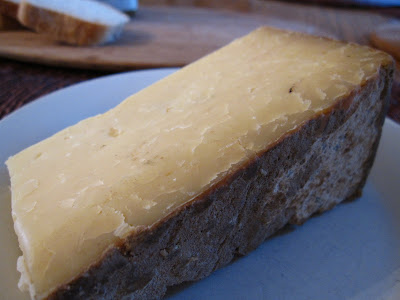 My good friend, the Blue Cheese Brit, likes to crow about how only the English make “a proper cheddar.” His refined palate has often been noted on this blog, since the BCB is a DCE (Daily Cheese Eater), and we often compare notes. Recently, I went to a party at his house, carrying a wedge of American cheddar in my handbag. When I slid it onto the Brit’s cheese board, he took a step back. “What’s this?” he crooned. “Is that a clothbound cheddar?”
Friends, the Brit had a wee heart attack when he discovered this nubby bit of gorgeousness came from Vermont. He took one bite of this sharp, cavey delight, then broke into a fox-like smile, “You can say the Blue Cheese Brit endorses it. It reminds me of Montgomery Cheddar, the best clothbound cheddar in the world. It has the same texture, taste, emotion.” He cut into it again, then declared, very aptly, “It’s like cutting through geological time.”
The Brit is right. Cabot Clothbound Cheddar appears mummified; it’s look and taste call to mind certain scenes from “The English Patient” – think of the heavily bandaged Ralph Feinnes, then recall the opening shots of the African desert. Swoon. This cheese is literally bandaged, then cellared, and carefully nursed to perfection by the laudable folk at Jasper Hill Farm, who are well known for their award-winning Bayley Hazen Blue. The result is a cheddar with starry crystals and narrative.
The taste is bracingly sharp at first, the texture firm, but then it melts on your tongue, releasing a woodsiness that reminds me of sweetgrass – the scent of it. Along the way, lactic acid crystals release their salty, caramel notes. Extraordinary. This is a cheese that just tastes better and better the longer it sits out, and alongside a glass of sherry or a pint of cask ale, it’s stunning. Interestingly, this is a pasteurized cheese, and it’s only aged 12 months -- not years, the way some cheddars (Hook’s, for example) are put to rest like long-sleeping beauties.
Like my British cheese friend (nemesis?), I am smitten with Cabot's. I can think of few pasteurized cheeses with this much flavor, and the fact that it’s easy to come by – and consistently good – makes it my new fave hunk. As the Blue Cheese Brit says, whenever anything sweeps him off his feet, “Oh, dancer!” 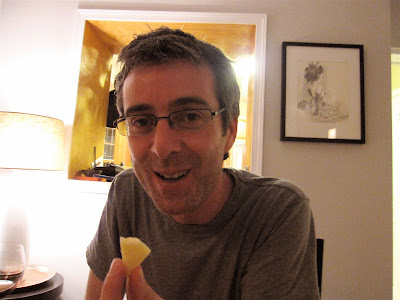 Posted by Madame Fromage at 5:08 AM