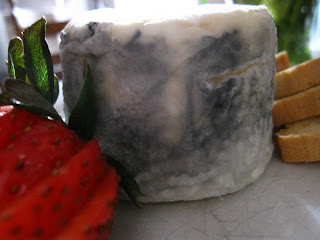 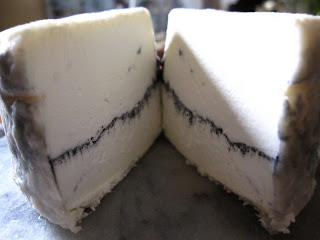 Over the weekend, I hosted an all-goat blow-out. Really, I just wanted to show off the glorious work of Amazing Acres’ Debbie Mikulak, a new artisanal cheese maker from Elverson, Pa. whose pristine chevre has every cheesemonger I know talking.
Debbie makes unusual goat cheeses – her Sea Smoke reminds me of Humboldt Fog, the famous ashy streaker from California’s Cypress Grove, but Debbie’s version has a bloomy rind, which lends an Alice-in-Wonderland-like quality to this delicate, pleasing cheese.
Picture Humboldt Fog as a mochi ball, and you’ve got the texture down – a veil of damp, slightly gummy bloom serves as the surface here. Sea Smoke looks like a magic mushroom, a cave formation, a doorknob into an underworld of talking caterpillars and rabbits.
The texture is dense, moist, and a little chalky – crumbs settle on the tongue, like cloudcover. The taste is slightly floral at first, with a mild tang, and a flourish of pepperiness at the end -- think watercress. The layer of vegetable ash is mostly tasteless, but there's a woodsy cleanness to the whole package – it’s a spring dream. I like it best with blackberries and strawberries, as dessert.  For a light supper, it would go well with sautéed fiddleheads and a glass of Prosecco.
Debbie also makes Banon, a denser cheese she wraps in grape leaves and soaks in brandy – a nod to the French, who popularized this adorable, giftable cheese in Provence (the French use chestnut leaves and eau de vie). Debbie’s version is firmer than the French varieties I’ve tried, but really delicious, a perfect appetizer alongside almonds and a glass of Cote-du-Rhone.
I’ll be writing about Debbie’s cheeses for the next issue of Grid Magazine. I also mentioned her goat cheese in a recent segment of “A Chef’s Table” on WHYY, Philadelphia’s NPR affiliate -- it's at the very end of the program, listen-to-able at the link. I guess I’m turning into something of a Sea Smoke evangelist, but then…you know, I have a thing for bloomy rinds and ash.
If you live in the Philadelphia area, look for Sea Smoke and other Amazing Acres cheeses at Fair Food Farm Stand, DiBruno Bros, and Quince. (You might want to call first, since supplies are limited.)
Here are a few scenes from Debbie’s goat-cheese debut, beginning with a photo of her and husband, Fred Bloom. 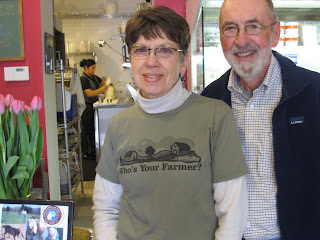 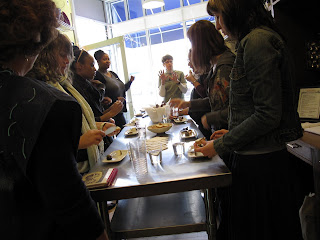 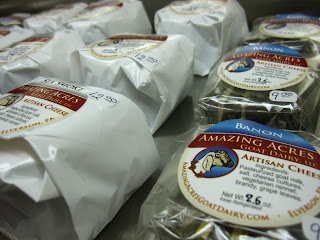 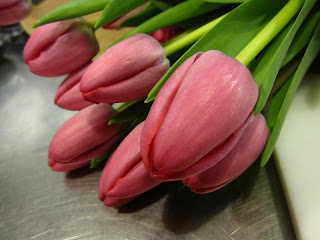 Posted by Madame Fromage at 3:45 AM