Curds 101: The DL from Limburger HQ 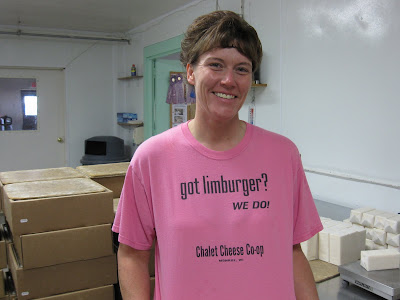 In Wisconsin, everyone loves a squeaky curd. In Philadelphia, most people have no idea what a curd is, let alone a squeaky one. I was at a party back in May when a New Yorker asked me, "So, what is a curd?" followed by, "So, how is cheese made?" Oh honey, he got an earful.

"A curd is like a unit of unripened cheese," I told him. "And a squeaky curd is super fresh. It actually goes wah-uh wah-uh against your teeth." He looked at me in disbelief.

Recently, I traveled back to 'Sconny to visit the fam, and I got to embark on tours of two cheese plants. The Wisconsin Milk Marketing Board set it all up for me and even gave me a shmancy tote bag. Such largesse! I felt pretty special and also kinda weird -- I don't know too many people who would wake up at 7 a.m. on their vacation to check out curd vats. But there I was, meeting Master Cheesemaker Myron Olson at the Chalet Cheese Co-op in Monroe, Wis. for a tour of his farmer-owned plant, the only producer of Limburger. 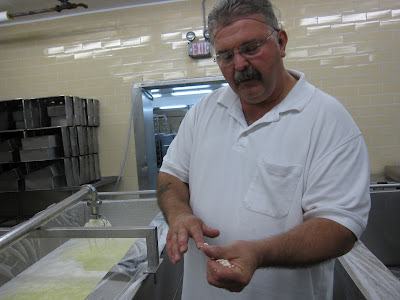 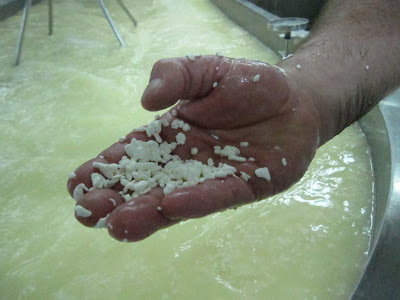 Olson has been a cheesemaker for 40 years, and he has the stride of a farmer. Big shoulders, slow walk. He smiles a lot, even when he's chewing, and he uses the word "shtink" with pride. I didn't mind putting on booties and a hair net for him.
First stop: the open vats where local milk is heated in tubs the size of Winnebagos. After rennet (a coagulant) is added, the milk solids settle to the bottom and the whey rises. I watched as two guys with cheese "harps" -- literally, metal frames strung with fine wire -- slowly raked the vats, a process called "cutting the curd." 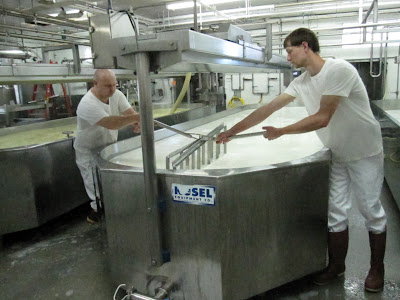 When Olson reached in after the curds were cut, this vat of Limburger-to-be revealed handfuls of pebble-sized curds. Once these get pressed into forms, salted, and doused with special cultures, Limburger as we know it is born. 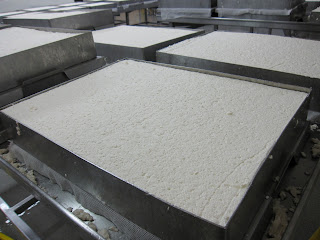 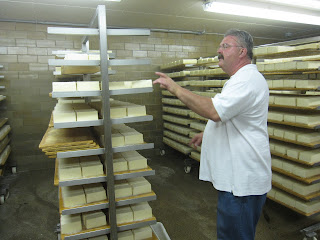 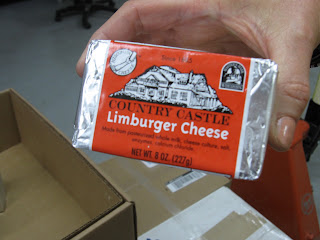 The Chalet Cheese-Coop is the only plant left in the country where traditional Limburger (and Liederkranz) is made. It's a real stinky hub.
I pecked at a few Limburger curds -- they were flavorless, like cottage cheese. After they are pressed and aged on pine boards, however, they turn into salty, oniony blocks of spreadable goodness. Olson let me sample Limburger at three different stages: an unripe Limburger tastes bland and chalky, at two months Limburger is creamy and pungent, and at three months Limburger is gooey and noxious, in the best possible way.
"Limburger is actually a probiotic cheese," Olson told me. "It's got a lot of good enzymes, so it's easy to digest. That might be why older folks like it." He chuckled. "Everyday I eat a piece of Limburger and I do stay healthy!"

Chalet Cheese Co-op does not appear to have a web site, although the company has fairly good distribution around the country at specialty cheese stores and many Whole Foods. New York, Florida, and Pennyslvania consume the most Limburger, believe it or not, which leads me to believe that some of my neighbors are holding out on me. I guess I'm not the only one who eats Limburger and strawberry-jam sandwiches around here.
Donna, pictured up top, is one of about 22 people on staff at Chalet Cheese Co-op. The company also produces German-style Brick cheese and award-winning Baby Swiss.

Note: for a list of factory tours around the state of Wisconsin, click here.
Posted by Madame Fromage at 5:37 AM