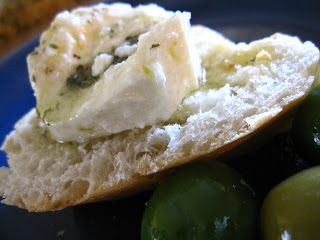 I went to Denver, Colorado for a writers' conference this weekend, but I got sidetracked by cheese. First, there was soul-food mac'n cheese at Tom's Home Cookin' in Five Points, then there were late-nite nachos at Garbo's, followed by cream-cheese-stuffed French toast yesterday at a Jewish deli. Just as my friend D. was driving me to the airport this morning, he remembered an all-grilled-cheese joint in Denver, called Chedd's, and we almost had to turn the car around.

Luckily, I was still full from our cheese party the night before, a meal crowned by gorgonzola-slathered steak and preceded by one of my fave new discoveries: marinated chevre. 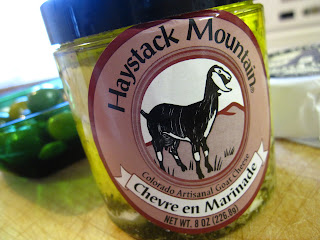 I went to Denver on a mission -- to eat some mountain goat cheese from Colorado's beloved Haystack Mountain Dairy, based in Longmont. Having eaten my share of Pennsylvania goat cheese lately, I was curious to nibble at new elevations, and Haystack's gorgeous jar of chevre floating in herbs and oil was a highlight -- better than the mac'n cheese and the stuffed French toast put together.

Sometimes the simplest pleasures are unadulterated, and that was the case as I reached into this jar and withdrew a moonish cutlet gilded with crushed herbs. My old roommate, David, was working on his Parm risotto, and his partner, Tim, stood at the fry daddy, staring into bracelets of breaded onions, while I sat purring in a corner chair, goat cheese in my mouth, olive oil running down my wrists. 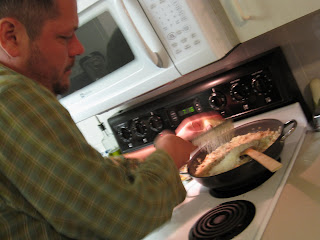 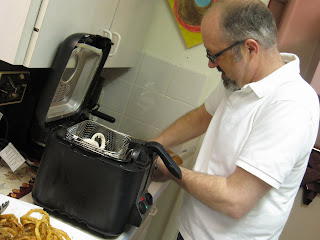 Haystack's marinated chevre was delicate and pillowy, fluffier than other marinated goat cheeses I've tried. The mouthfeel was exquisite -- not the slightest bit chalky or grainy -- and the flavor, it tasted of mint and fresh snowfall, bringing to mind a spring herb garden, lightly dusted with sleet, the herbs still young and tender. What are the Haystackers feeding their goats?

The rest of our cheese party surpassed my expectations. David's risotto was gorgeously mushroomy, Tim's onion rings were feather-light, and the gorgonzola-garlic butter I made to top our steaks was furious good (see recipe below). 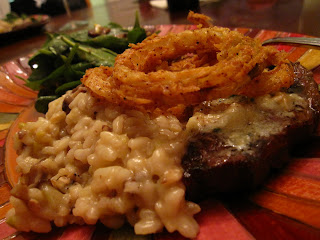 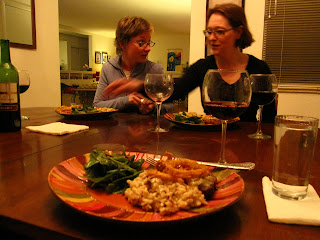 Next time I'm in Denver, I want to try Haysack Peak, an ash-coated pyramid that won first place at the 2009 American Cheese Society Awards. And I want to check out Chedd's for a Meatless Horse Sandwich. In the meantime, I'll keep dreaming of that pillow-light chevre, atop a crusty baguette with green olives. Glorious.

An hour before eating, roast the garlic bulb at 400 for 40 minutes -- you'll want to lop the top off, drizzle it with a little olive oil, and wrap it in foil. When it's fini, mash it in a bowl, until it's pulpy, then stir in butter, gorg, chives, and salt and pepper to taste.

Slather it on grilled steak, and save whatever is left to spread on toasted baguette.
Posted by Madame Fromage at 6:47 PM